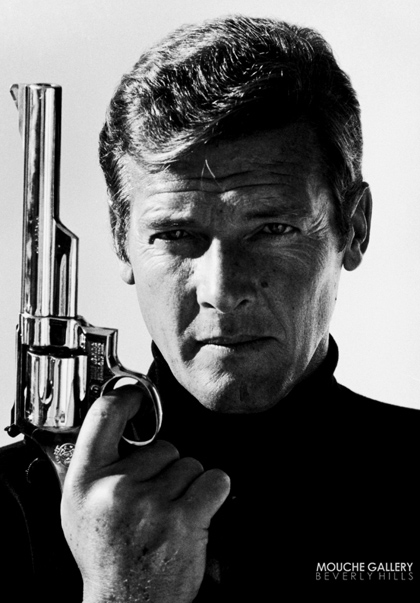 Live and Let Die is the 8th installment in the official James Bond film series and was the first to feature Roger Moore as Agent 007. The 1973 sequel finds Bond investigating the death of MI6 agents who were working with the CIA and leads him to a conspiracy involving Harlem drug lords and a corrupt government in the Caribbean.

A close-up photo of Bond with his 357 Magnum Revolver was shot as a promotion for the ‘Live and Let Die’ feature film by Terry O’Neill.  The photographer is the only one to have shot all 5 Bonds throughout the years – Sean Connery, George Lazenby, Roger Moore, Pierce Brosnan & Daniel Craig.

Roger Moore appeared in 7 Bond feature films, starting in 1973, with his first film Live and Let Die’  ending with a ‘View to Kill’ in 1975.  The English actor has appeared in the character more than any other character and is also was the oldest to ever play 007.

Terry O’Neill’s works have been published in hundreds of books including his own.  This shot of Roger Moore is on the cover of ‘Bond, Beauties and Villains: Inside the World of James Bond’ by Terry O’Neill and featured in the ‘All About Bond’ in 2012.

Terry O’Neill is one of the world’s most collected photographers with works exhibiting in museums around the world. O’Neill received a CBE award from Queen Elizabeth for his contributions to photography. He has over 300 pieces in the permanent collection of the National Portrait Gallery in London and has exhibited in other notable institutions such as the Victoria & Albert Museum, Brooklyn Museum and private collections worldwide.