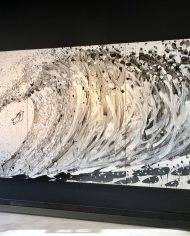 Medium: Acrylic and Varnish on Canvas

Everhart’s large 16 ft. wave painting’s , titled Surfing With Franz and Willem (2016), visual articulation was designed to express the waves of raw influences from the early blank black and white pages of the child’s coloring book to the later academic influences of the black- and- white abstract expressionist paintings, to the creative thinking of Schulz’s raw beautiful line constructions.

Nine works, eight on paper and one on canvas, titled Psycho Cyclone, originated in Everhart’s Taha studio in Tahiti, where cyclones are common. They continued and evolved back to his Venice, California studio in the real world, where psycho events are more common.