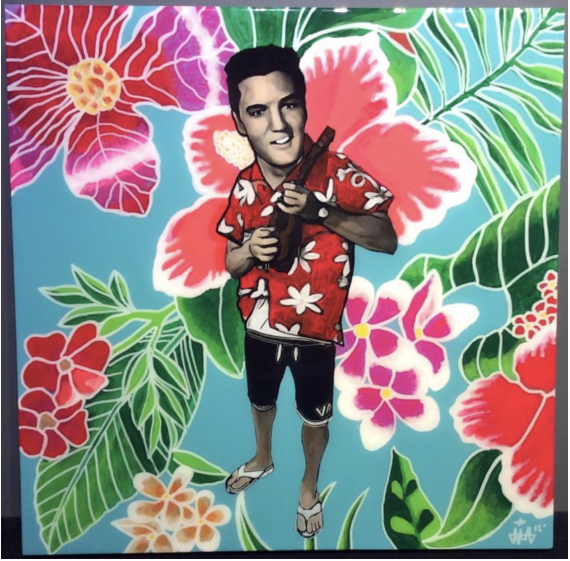 Original Art by the Producer BDB featuring Elvis from Blue Hawaii. with a ukulele.

THE PRODUCER BDB creates paintings of pop icons dressed in the most current fashion trends, creating his own distinct style of pop meets street style.

The Producer BDB is a contemporary artist with his roots beginning in street art. His drawings combine Pop Icons with current fashion trends. His distinct style emerges from the street, pop, fashion and fine art. The early stages of his career were marked by a series of mural works. He traveled around the globe and created murals on the cities of Paris, Madrid, Rio de Janeiro, Miami, Berlin and Los Angeles. After dabbling in fashion and design, he realized his true passion.
In his artworks, one can find characters such as Frida Kahlo, Andy Warhol, Karl Lagerfeld, Anna Wintour, Hillary Clinton, John Lennon and countless others. His art has been showcased and bought by collectors around the world in the streets and Art Galleries of Rio De Janerio, Madrid, Paris, Miami, Berlin and Los Angeles.
The Producer Bdb’s works have been exhibited in all major artfairs in the USA – Art Basel – Miami & Hong Kong, Armory NYC, Aspen, Palm Springs, Chicago, DesignCon and LA Art Fair.

The Producer BDB is a contemporary artist with his roots beginning in street art. His drawings combine Pop Icons with current fashion trends. His distinct style emerges from street, pop, fashion and fine art. His art has been showcased around the world in the streets of Rio De Janerio, Madrid, Paris, Miami, Berlin and Los Angeles, where he currently resides.

Flore is a hot new artist whose work echoes influences of the late Keith Haring, Roy Lichtenstein, and Andy Warhol. With his typography, Flore aims to strip away society’s filters, the habits we get stuck in, the rules we blindly follow, and the stereotypes we subconsciously subscribe to: “I try to see things simple, but you can get lost very easily in the monotonous pattern of life. Hi-def, multi-colored filters, or distractions, can mask reality; I want to deconstruct and expose those layers for what they really are, not just what they seem”.