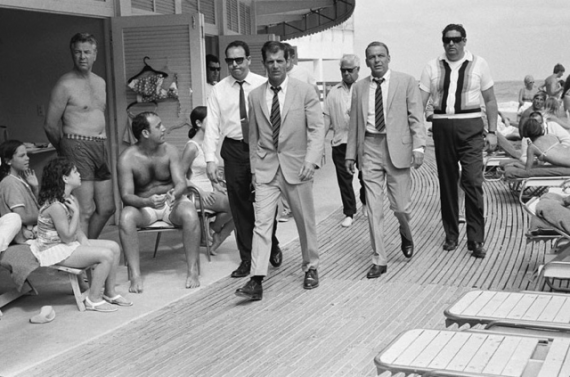 Please Call For Pricing and Additional Information 1.310.858.8114 or Email us at info@mouchegallery.com

This picture was taken on the first day of filming, as Frank walked from his hotel at the Fontainebleau Miami Beach to the set of ‘The Lady in Cement’. “This was the first time I ever saw Frank and I was astonished by the mere power of his presence, mesmerizing the crowd as he walked casually past.”
– Terry O’Neill

“I got friendly with Ava Gardner on the film and I used to take them to a sports jazz club in London. One day you know I got a chance to go photograph her ex-husband. She goes you know what, I’ll write you a letter. So she writes me this letter, [and] I’m waiting for Frank to come onto the set.. and he comes around the corner with about 4, 6 bodyguards and I suddenly realized what a giant of a man that he was. This was my first view of him and I handed him the letter and he read the letter, he said right you’re with me, then he totally ignored me for the next three weeks. Which I realized now, or shortly afterward, that he was giving me the biggest gift that anybody could give anybody. Because I could go anywhere with him. He didn’t even acknowledge the fact that I was there, and I realized the secret of great photography is to fade into the background and make yourself, sort of, as invisible as possible. And that was sort of my first major lesson in taking good pictures.”