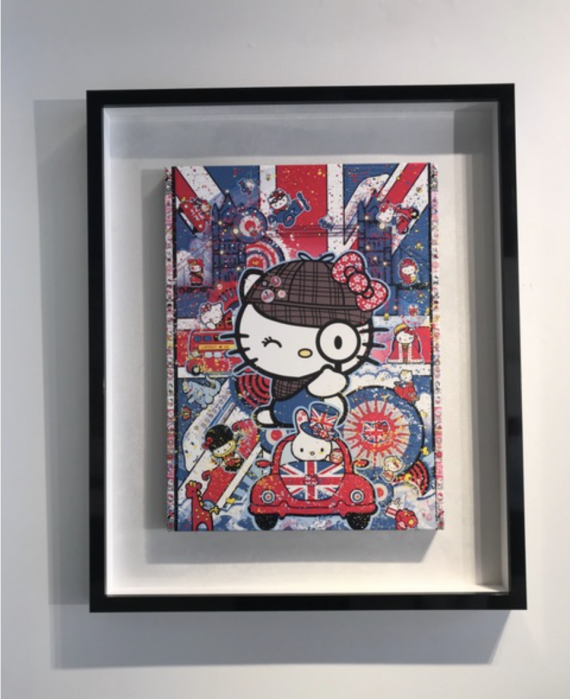 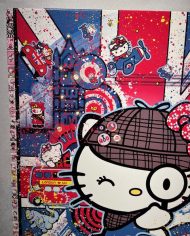 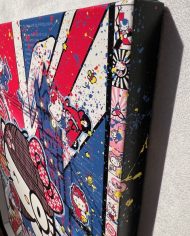 It’s a Marvelous MOD world as Kitty-Chan is reimagined in a Japanified swingin’ semi-psychedelic Sixties London, cosplaying as retro-fied Brit-Punk lead-singer of “The Hello Sherlocks”, searching for a MOD-est clue to who stole Her Majesty’s favorite poem (The Kitten and the Falling Leaves—which you can read part of on the top right), with Artistic nods to Italian vespas, London bridge, shinkansen (bullet train), Godzilla (Jo-Zilla), Ultraman-Kitty, British Royalty, Daruma (founder of Zen Buddhism), SupaPup riding Kirin the Giraffe, Badtz Maru in a Mini-Beetle hybrid, Cancelled Cathy (plus other Sanrio-inspired friends) including Sake served by Judy (Mouse) (in Kitty’s Milk Bottle), peppered with a British Breakfast of the iconic MOD symbol(s) + Royal airforce defending London, kimono and chiyogami patterns, classic kitty buttons from the 70s (on her hat), and encapsulated on either side by original Kitty-chan Japanese Hanafuda cards (which Nintendo invented in the 1800’s, used to this day by the Yakuza), and designed especially for this piece.