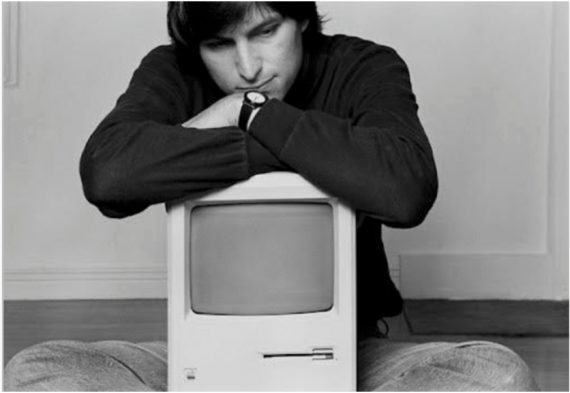 “I remember together going very deeply with Steve into dreaming and visioning, drinking beer. We weren’t over indulging but having fun and there was this moment when he suddenly jumped up, left the room and returned with the unreleased Mac. He then plopped down on the floor with it on his lap. It was a totally spontaneous moment, nothing preconceived to make Steve look like a guru. A minute or so later, he put the Mac on the floor and threw his head back laughing. We got a series of sequences of really wonderful imagery – all with an authenticity that came in the moment. In the business world, these shots might seem to be conceptually perfect but the truth is that they were spontaneous and real, and not stiff or forced, just beautiful and natural. What I saw when Steve returned with the Mac was a beautiful sense of accomplishment – a tender experience I will always remember.” Norman Seeff

Norman Seeff was able to photograph Steve both in the work environment with the Apple team, but also in Steve’s home. Seeff recalls how Steve surveyed his work before he was comfortable enough to allow him to come to his home. This photoshoot would in turn produce one of the most iconic portraits of Steve Jobs of all time.