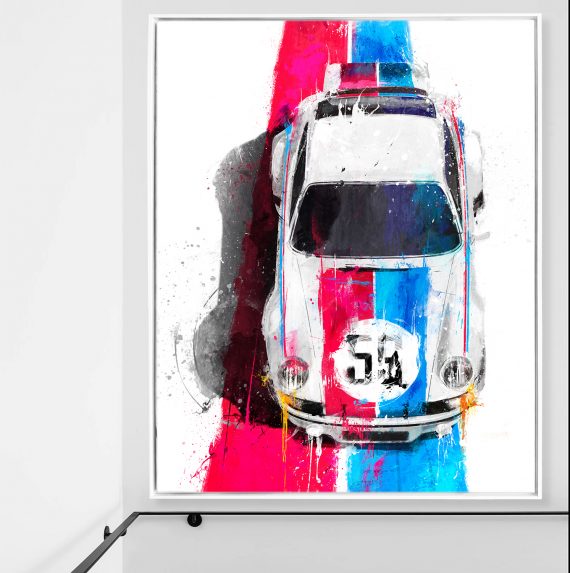 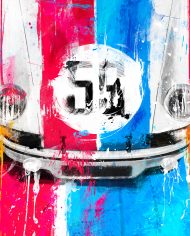 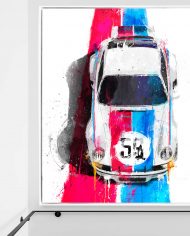 Capturing the iconic cars of this century – Bond’s DB5, 911 Porsche RSR Brumo and McQueen’s Mustang GT.  NICO captures the exuberant motion of the most coveted automobiles in the world.  The blurred lines of paint and photography evoke brisk movement, power and emotion.

Hurley Haywood sat behind the wheel of the famous BRUMOS 911 RSR with the number 59 in 1973. With this RSR he took the first of his five 24h of Daytona wins. The original car was shipped back to Germany to undergo tests, but was then later destroyed and lost forever.

Since its debut at the 1963 Frankfurt motor show, one million 911s have been built, and Porsche claims that 70% of these are still roadworthy. The millionth 911 has been kept by Porsche, and will reside in its collection after a world tour.

Its popularity isn’t hard to explain, but it was Ferdinand Porsche who best described its qualities: “The 911 is the only car you could drive on an African safari or at Le Mans, to the theatre or through New York city traffic.”

Here the iconic Porsche 911 #59 is immortalized by NICO. Growing up with an auto-engineer and visual artist father in France who fueled his love for the aesthetic beauty of cars he trained to be an automotive designer in Paris.  NICO captures the exuberant motion of the most coveted autos in the world.  His paintings flows with energy and movement that jets of the canvas.  The blurred lines of photograph and paint evoke brisk movement, power and emotion.  A perfect compliment to the most legendary and revered automobiles of this century.

NICO’s originals have been exhibited in the Petersen Museum, Los Angeles.