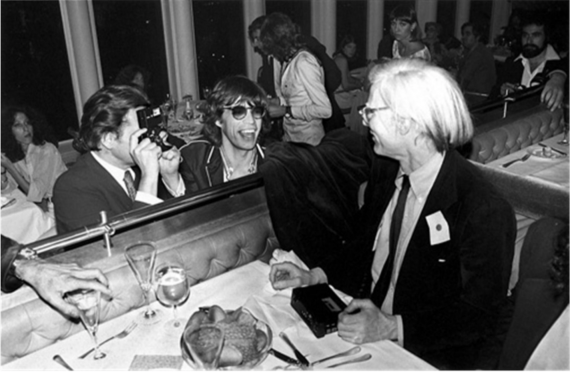 Andy Warhol and Mick Jagger met at a party in 1964, when the Rolling Stones were on their first US tour. At this time, both were rising to fame and establishing their image.  The Rolling Stones were viewed as the dirty alternative to the clean-cut Beatles and art collectors may have viewed Andy Warhol in a similar way compared to other artists of the time, such as Wayne Thiebaud, Jasper Johns and Tom Wesselmann.

The artists’ first collaboration was for the Sticky Fingers album cover, in the 1971.  Mick Jagger described Warhol as nothing more than a voyeur in a tour documentary in 1972, but admiration grew over the years. Both Warhol and Jagger realized that the other could help build their image.  Their relationship and collaborations over the years was partly a business arrangement with lavish rock-star parties.