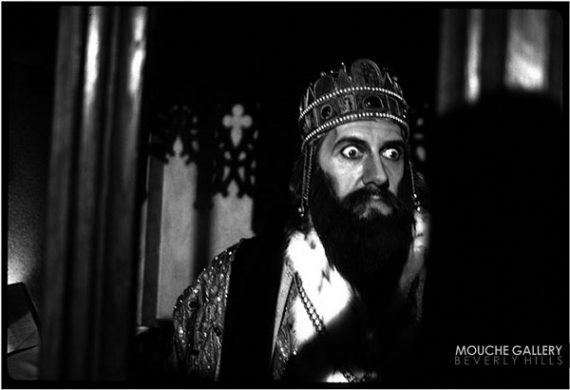 “After abandoning producing and directing Music Videos in 1972 to focus on features, I couldn’t resist when asked in 1983 to produce & direct Mick Fleetwood. I consider him the best drummer in rock and roll. And, though he doesn’t sing or compose I found it challenging to come up with a subject matter for the video. When Mick came over to my house and I saw how tall he was I immediately thought of Nikolai Cherkasov who starred as Ivan the Terrible in Sergei Eisenstein’s film masterpiece. I told Mick that a remake would make a wonderful video. He wasn’t aware of Ivan the Terrible or Eisenstein’s film. I had a book in my library and showed him pictures. He immediately agreed. We proposed it to his record company and they said okay. Only problem was the song they chose was not really in keeping with what I had for my visual storytelling. But we pressed on anyway. The video was brilliantly shot by Paul Ryan in black and white and resembled the Eisenstein masterpiece, only on a smaller scale. I thought that if need be we would film a kid sitting in front of his TV in color and flicking through the channels. He would come upon this black and white footage and watch the video. At the end of the song we would cut back out to color and he would turn off the TV. We never had to shoot those bookend images as the film worked by itself. Unfortunately, the song was not a hit, which is part of the problem I always faced when directing a video. I am at the mercy of the song.”