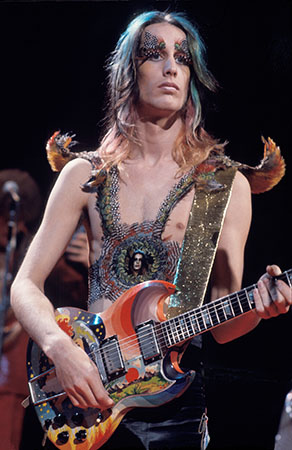 From the Saga of Eric Clapton’s Famous Fool SG –

Todd Rundgren was completely blown away the first time he ever saw the guitar. That was back on March 25, 1967, hanging from Eric Clapton’s shoulders. Cream was on-stage at the RKO Theater making its American debut as part of disc jockey Murray the K’s Music in the Fifth Dimension extravaganza. Rundgren was in the audience and the Gibson mesmerized him. Eric, in fact, had just started using the SG. Part of the mythology insisted that the paint was still tacky during this spectacular musical concert revue that also included the Who, Mitch Ryder, Wilson Pickett, the Blues Project and Smokey Robinson and the Miracles.

That was a little difficult to believe but the fact remands that Eric Clapton had purchased the guitar only a few months earlier at the beginning of 1967. This would become his main axe for the next two years. Eric would use the cherry finish double cutaway for both live and studio work; it would be featured prominently on Disraeli Gears and would also appear on Wheels of Fire, Goodbye, and on the subsequent live albums, Live Cream and Live Cream II.