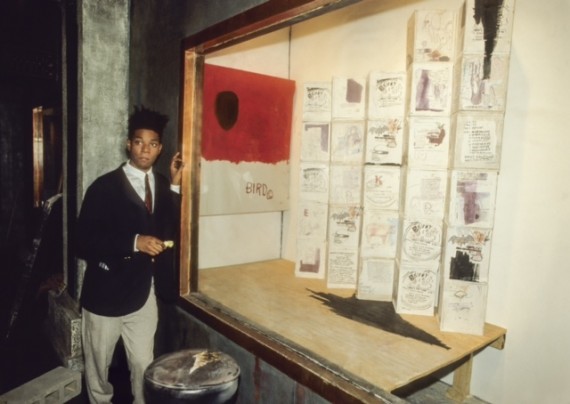 Jean- Michel Basquiat, outside of the infamous Area Nightclub next to a window featuring his drawings, 1985, NYC.

About Area Nightclub – Area, the nightclub-as-art-gallery that came to define the creative hedonism of 1980s New York.  If you were lucky enough to get plucked from the manic and overdressed crowd flooding the club’s entrance on Hudson Street, the first thing you saw once inside was a hall of dioramas showcasing Area’s house performers in costumes.  Many artists including Warhol, Jean-Michel Basquiat, Francesco Clemente, Kenny Scharf, Keith Haring and others art stars of the 1980s — created special installations and mural for Area.
Warhol set up a Polaroid studio there, photographing Area’s beautiful people.  Keith Haring was a regular contributor to the club’s rotating installations, Jean-Michel installed 2 murals and used to DJ there at the iconic NYC nightclub.