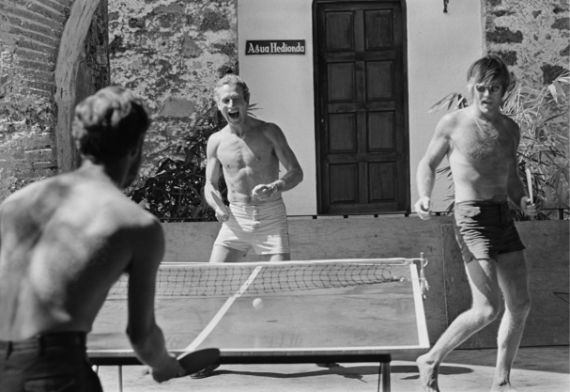 Add to Wishlist
Share this product
Lawrence Schiller, was shooting Nixon crying after losing to Kennedy, Kennedy asleep on the floor of a plane, Kennedy’s assignation, Martin Luther King during the Watts riots in 1965, Lee Harvey Oswald moments before death, likewise later on with Gary Gilmore. Later still, he was the first man to photograph a Playboy bunny with hair — pubic — on show, the dancer Paula Kelly re-enacting Matisse’s dance. He was the stills director on Butch Cassidy and the Sundance Kid, and, Lady Sings the Blues, making those images. He made a documentary on Dennis Hopper in 1971, when he went nowhere without a gun and thought he was Orson Welles. He lived on campus with Timothy Leary and wrote a book about LSD. He was at the trials of both Patty Hearst and OJ Simpson, has written four books with Norman Mailer and has directed and produced films — lots of films, even one about the unsolved murdered child Jon Benet Ramsey.
Here, Schiller captures Paul Newman and Robert Redford playing table tennis while taking a break on the set of Butch Cassidy and the Sundance Kid. It was filmed in Durango, Mexico in 1968. Following its 1969 release, the film was nominated for and took home a myriad of awards, including the Academy Award for Best Cinematography and the BAFTA Award for Best Film.
‘I gave up taking pictures in 1976. I wanted to write books, make movies. I was more interested by then by the hesitation and the pause. I was developing a new way of interviewing. I’d ask: what’s you’re earliest memory of death? And with that one question I would have the whole of their intimate thoughts, the story behind the story, and before you know it, it’s not an interview situation — you’re drinking coffee and buying groceries together.’ I don’t mention Truman Capote in Cold Blood being rather earlier than The Executioner’s Song that he wrote with Mailer: I can see he is a man who likes to make others listen. He might say he wasn’t impressed by any of the people he captured — ‘As the saying goes kings and queens, murderers and rapists’ he says — but he is a man impressed by himself. And why shouldn’t he be with what he’s achieved?
So was it chance — right time right place, good coincidence — that he found himself at all these pivotal points in history, even the Muhammad Ali Versus Fraser fight famously known as the Killer From Manila. With his camera, he has created a churchful of icons for these times of change. His pictures tell a story of vulnerability, regret, lives lived and lost. Even his pictures of Hollywood stars capture a different side, James Stewart and Spencer Tracey at friend Clarke Gable’s funeral, Tippi Hedrin and Alfred Hitchcock during the shooting of The Birds; Bette Davis smoking a fag (rather than a cigarette), and the unforgettable Buster Keaton.