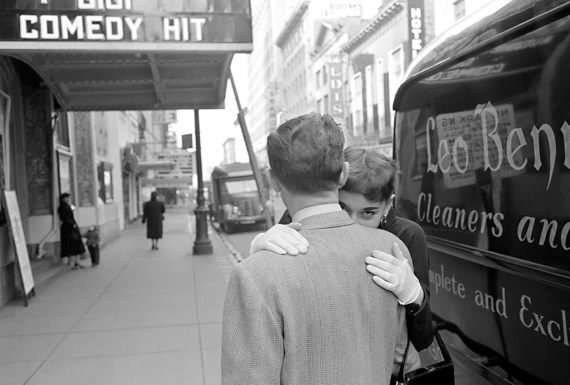 Actress Audrey Hepburn photographed in Broadway, whilst appearing on Broadway in ‘Gigi’. This story was part of a multi-day photo shoot for Esquire magazine, New York City, 1951.

Lawrence Fried (1926-1983), was an award-winning photojournalist who covered political, social, and artistic events of his time for top publications such as Look, Life, The New York Times, The Saturday Evening Post, Vogue, and Parade Magazine. Throughout the 1950’s and 1960’s, he was the most successful photographer at legendary New York Photo Agency, PIX, Inc., and by the early 1970’s, he had distinction of having photographed the most Newsweek covers in the history of the magazine.

After returning from World War II, the New York City native immersed himself in the world of the theater, excelling at capturing the essence of his subjects and creating a warm and easy-going connection with such established luminaries as Billy Wilder, Marlene Dietrich, and Ingrid Bergman. Soon he was creating iconic images of emerging stars such as Audrey Hepburn, James Dean, Marlon Brando, Paul Newman, Julie Harris, Julie Andrews, Shirley MacLaine, and Meryl Streep. He captured the most notable musicians and visual artists of their day, such as, Louis Armstrong, Bob Dylan, Bette Midler, Mick Jagger, Stevie Wonder, Georgia O’Keeffe, Richard Serra, Norman Rockwell, and Willem de Kooning and in 1965, Fried photographed Andy Warhol for a story that was never published.