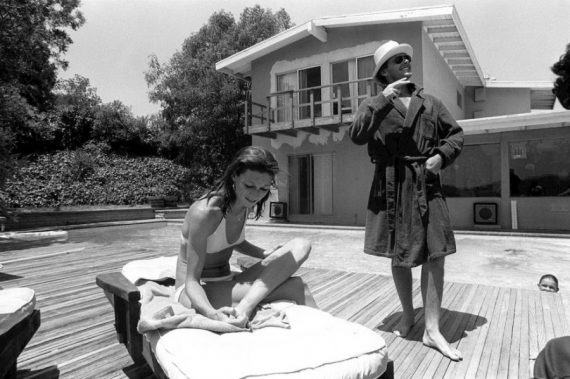 Hand-Signed and Numbered by Julian Wasser
Other Sizes Available Upon Request. Please Inquire for Pricing and Custom Framing.

Add to Wishlist
Share this product
JACK + ANJELICA IN LOS ANGELES, 1971 OUTSIDE OF THEIR MULHOLLAND HOME BY THE POOL.
Julian Wasser started his career in photography in the Washington DC bureau of the Associated Press where he met and accompanied the famous news photographer Weegee – who would become a lasting influence on him. In the mid-60s Wasser moved to Los Angeles as a contract photographer for TIME, LIFE, and FORTUNE magazines and becoming internationally known as the go to guy for getting candid but memorably composed photographs. (His iconic images of Jack Nicholson and Anjelica Huston; Marcel Duchamp and Eve Babitz; and a young Jodie Foster are already classics.)
He has done cover assignments for The Sunday Telegraph, and The Sunday Times colour supplements in London. His photos have appeared in US Magazine, Vanity Fair, TV Guide, Paris Match, Der Spiegel, Oggi, Hello, Playboy, Elle, Vogue, and GQ and in exhibitions in galleries and museums around the world.