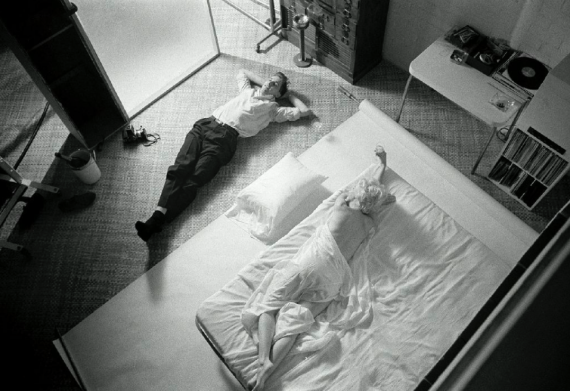 On the evening November 17th, 1961, in Los Angeles , Douglas Kirkland photographed Marilyn Monroe. He was a freshman photographer, 24 years old
with a huge crush on Marilyn (like most men had), on his first major assignment for “Look” magazine, and Marilyn was Hollywood ‘s sexiest star. She was
35 years old, and this was just one year before her untimely death. The photo session was being taken for Look Magazines 25th Anniversary cover.
Douglas Kirkland photographed Marilyn in the intimate confines of an unmade bed. The result is a series of some of the most spontaneous and beguiling
photographs ever taken of Marilyn.

“I was a mess.. a mess. There I was, a kid in my mid twenties, trying to make my mark, trying to imagine some way to approach the biggest star in the world
in an entirely new way. It obviously had to be eye-catching, but I wanted a more overt and honest depiction of her than perhaps she was accustomed to
showing. Being Canadian in principle and Midwestern in culture though, it wasn’t easy to form the words ‘Marilyn.. I want you undressed.’” – Douglas
Kirkland