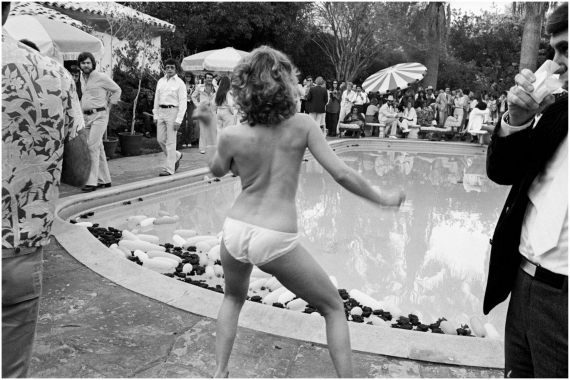 “I think John Rockwell invited me to this party. behind the Beverly Hills Hotel is a huge mansion owned by David Lane. I knew many of the guests, although an older crowd for me because I was just out of my teens. It was a warm sunny afternoon. I was standing next to the bar trying to get a Seven-Up. Suddenly, this lovely girl started to strip down right in front of me. I only had a wide-angle 28 mm camera lens not really wide enough for the moment, so I backed up as far as I could, almost knocking over the bar. You have to do the best you can in these situations.

Take a close look at the guy on the left walking towards the girl. That is Burt, who almost thirty years later, is still a permanent fixture on the party circuit. I am sure he was on his way to get this girl’s telephone number.

Back then it was not too much of a big deal going to a Mega Mansion party in Beverly Hills with nude girls because I attended three of four of these a week!” – Brad Elterman

Brad Elterman is a professional photographer from Beverly Hills, who addressed the Rock ‘n’ Roll lifestyle in Hollywood encompassing pop, punk, and rock bands that include The Faces, Rod Stewart, David Bowie, Led Zeppelin, The Sex Pistols, The Runaways,  Queen, Blondie, The Ramones, The Who, Michael Jackson and countless others. Some of the magazines, newspapers and other publications that he contributed to include Creem Magazine, Circus Magazine, Rolling Stone Magazine, People Magazine, and New York Post.