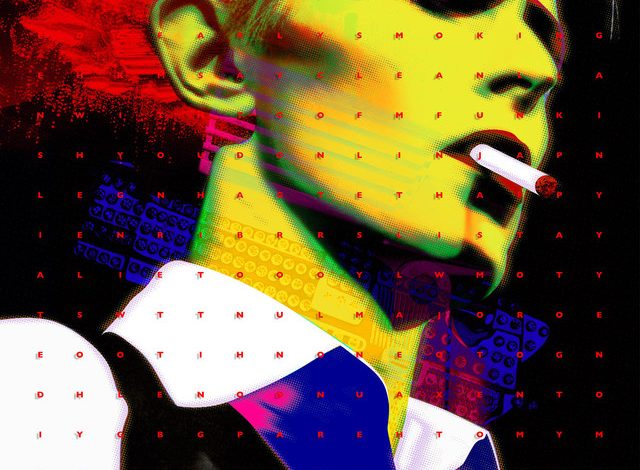 Zubair Ansari, known to the art world as Zoobs, is a contemporary artist renowned for his celebrity portraits that explore the complex relationship between parent and child, life and death.

Born in Chelsea, London in 1972, the early loss of his father and his belief that he will someday be reunited with him would later factor into his artwork. As a teenager, Zoobs was fascinated with images of perfection, showing an interest in fashion and photography.

He studied Fine Art at Slade School of Art and later gained a first class BA Honours degree in Graphic Design and Photography with a commendation in Art Direction at Kingston University in London. In the late 90’s, he was awarded a scholarship to train under the mentorship of the renowned image-maker and colour-creator Serge Lutens at Shiseido Cosmetics International in Tokyo and Paris.

It was during this period he began to explore societies on going preoccupation with perfection and its correlation to the stability of the human persona. He employed varied practises of performance art, sculpture, painting, photography and graphic design.

Early works such as Dreamlover (2003), The Gambler (2003) and Fame (2004) caught the eye of Guy Hepner, who brought him to public attention in the 2004 Here/Now exhibition where he was featured amongst leading international artists and photographers such as David Lachapelle, Takashi Murakami, Rankin and Mario Testino.

This final bow welcomed in a new stage in his career that has now become what he is renowned for.

Until recently he has delved into a subject close to home, that of the complex relationship of parent and child, life and death and it’s the impact on personal development. Through highly stylized photography, graphic design and painting combined with autobiographical poetry and prose, he created works such as Hollywood Scroll (2009), Gaganess (2010), Pussy Cat Where Have You Been? (2010), Pink Aleph (2011), and Emerald Aleph (2011).

In a 2012 he created a series of canvassed celebrity portraits who earned their place due their own personal child/parental struggle for his 2012 solo exhibition Remix at Mew 42 Gallery, London. The exhibition featured Madonna in Madonna and Express Yourself (2012), Amy Winehouse in Back From Black (2011), Elton John in Elton Magic (2011), Prince William in King of Pop (2011), and Kate Middleton God Save The Future Queen (2011), purchased by Dolce & Gabbana and currently showcasing in their flagship store in Bond Street London. The portraits use his signature techniques to reveal images that are layered with splash points of exploding colour which partially mask and partially reveal the subject.
 
Zoobs’ commissions are both arresting and on the cutting edge transitions between style, fashion, sexuality, morality and human nature. His works are prized amongst niche collectors as well as frenziedly coveted by the media. Who is Zoobs the artist? He is his work. Every piece of his limited editions not only enrich the lives of their audience but they document the work of this legendary force.

He lives and works in between Los Angeles, New York, and London.