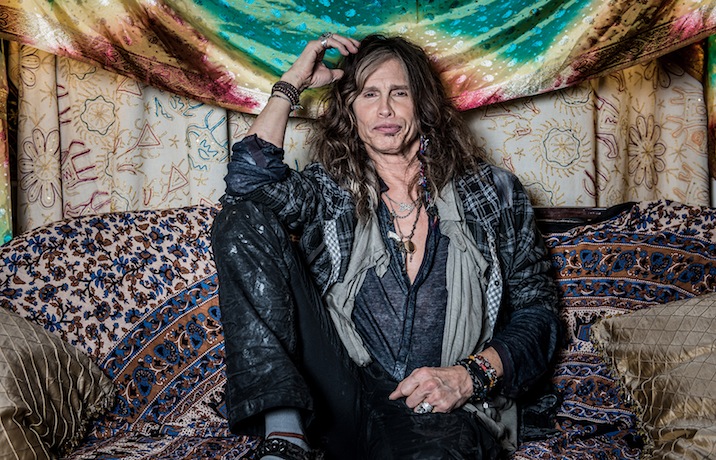 Born Stephen Victor Tallarico on March 26, 1948, in Yonkers, New York. As the lead singer of Aerosmith, Steven Tyler is considered one of rock’s greatest showman. The son of a music teacher, he started playing drums, but then focused on singing. After moving to Boston in the late ’60s, Steven Tyler hooked up with two members of an up-and-coming outfit called the Jam Band, guitarist Joe Perry and bassist Tom Hamilton, and after finding drummer Joey Kramer and second guitarist Ray Tabano (who was eventually replaced with Brad Whitford), they renamed themselves Aerosmith. The band became a regional sensation, combining the blues sleaze of the Stones/Yardbirds, as well as the power of such hard rock acts as Led Zeppelin and Deep Purple, as Steven (who by now had changed his name to “Steven Tyler”) proved to have a flair for the outrageous — his stage outfits resembled a rock & roll gypsy look, while long scarves dangled from his microphone stand.

Now he is included among Rolling Stone’s 100 Greatest Singers. He was also ranked 3rd on Hit Parader’s Top 100 Metal Vocalists of All Time. In 2001 he was inducted into the Rock and Roll Hall of Fame with Aerosmith. Though he is best known as Aerosmith’s front man, Steven Tyler is a man of many talents. Combining his love for music and his natural artistic ability, Steven Tyler has created a style of his own.

Skulls, symbol of the vital force contained in the head. Emblem of the Pirates, the Skull is also the symbol of defiance, good luck and immortality. After Warhol, Picasso, Van Gogh, and Hamlet. Steven gives us his vision of the human skull adorned with his signature leaves.