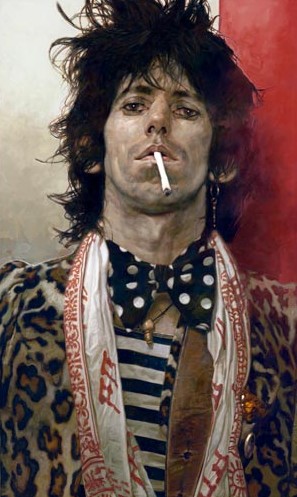 Sebastian Kruger was born in Hamlin, Germany in 1963. Kruger’s interest in art started at the age of 3, when his father took him to Disney movies. Kruger became plagued with drawing Donald Duck. His mind would recall Donald vividly, but the image kept moving around in the young artist’s mind it wouldn’t keep still, causing Krüger to waste piles of discarded paper. Kruger’s parents wouldn’t allow him to purchase a still image of Donald at the comic stand. So he would study and memorize the image, then hurry home to draw it. If he felt unclear about a particular detail, he would revisit the comic stand for further study. Unknowingly, this trained the artist’s mind to retain an accurate impression of the subject, to observe and memorize the details. A talent that would later become essential to the artist’s work.

Sebastian Kruger’s first assignment was to paint cover artwork and inlays for video cassette movies. Supplied with a set of brushes and acrylic paints, it was sink or swim. He began teaching himself how to paint out of necessity. Kruger learned that he had to paint in many layers to get the desired effect. Also discovering he needed to use a brush down to one hair in size to paint the finest details.

Sebastian Kruger has since painted the cover artwork for many important magazines such as Stern, Spiegel and Rolling Stone. Additionally, he has completed cover contracts with Captital and L’Espresso Magazines. Kruger has also done feature spreads for Playboy and Penthouse, and has designed and painted several commission works for LP and CD covers.

In the quarter-century of his creative career, Sebastian Kruger, as a promoter of New Pop Art has established himself as a popular artist whose objective is committed to the conundrum of identity and portraiture, the authenticity of the fictional. Perhaps never before has an artist displayed such an acute ability to capture the essence of those who occupy the public eye.

Sebastian Kruger’s works are appreciated and collected by many Hollywood notables, and his painterly twists on Bogart, Schwarzenegger John Wayne, The Rolling Stones, are classics of their kind. His faces are benevolent but subversive tribute to the world of the beautiful surface, the rock and pop culture of the sixties, with which the artist has cultivated an almost ritual relationship.

Perhaps Sebastian Kruger’s most remarkable talent is his ability to bring diverse painting techniques and styles to a given subject. Kruger’s works range from pencil drawings, to near abstract paintings and then to the near photo realistic, and he has mastered each difficult variant with remarkable skill. Though the foundation of most caricature may rest in the exaggeration of the certain of the subjects features, Kruger often ignores the obvious, and focuses on more subtle aspects, still conveying the essence of his subject in a most profound and amusing fashion. Despite such exaggerations and maniacal morphs, Kruger approaches nearly all of his subjects with a level of respect and sincerity.

His goal is to reach inside of them and pull out the very essentials of their character. This requires a certain empathy on the part of the artist, as well as the requisite artistic skills. Sebastian Kruger has had three popular art books published of his works and has a yearly art calendar from Morpheus. Sebastian Kruger’s art can be seen frequently in Playboy magazine and has also been featured in the likes of Stern, L’Espresso, Penthouse, and Der Spiegel and USA Today. He has recently been working on select motion picture projects.

“Kruger has a genius for capturing the essence of his subjects through caricature.”—The London Times