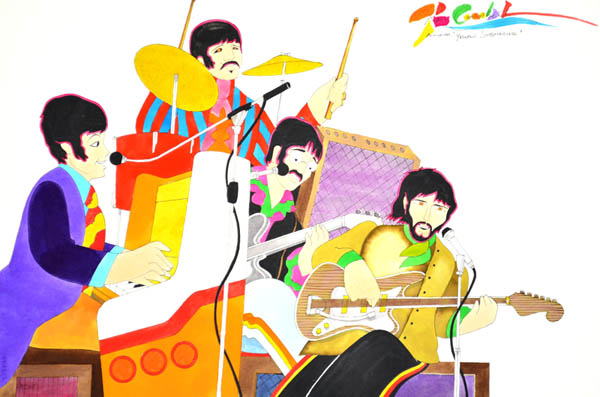 In the late 60′s Ron Campbell, with his good friend and colleague, the late Duane Crowther, animated many scenes in The Beatles Yellow Submarine feature film, including the Sea of Time sequence, and much of the action between the Chief Blue Meanie and his boot-licking side-kick, Max. He animated a lot of scenes involving the multi-named Boob, Hillary, the Nowhere Man. Earlier, he directed for King Features many of the episodes made in Australia of the highly successful ABC television series The Beatles.

Born in 1939 in Seymour, in the Australian state of Victoria, Ron Campbell has been a force in animation for the past four decades. Still working today, he is currently animation directing episodes of Ed, Edd, and Eddy, a mad-cap cartoon series for TV produced by AKA Cartoons in Canada.

Ron Campbell began his animation career in the early 1960’s, working on Beetle Bailey, Krazy Kat, and Cool McCool for King Features, as well as The Beatles. He then moved to the US and Hanna-Barbera, going on to write and produce cartoons for Sesame Street and animate on the original George of the Jungle and Tom Slick TV shows. Forming his company, Ron Campbell Films, Inc, he produced and directed the animation for The Big Blue Marble which won many awards, including a Peabody for Excellence in Broadcasting and an Emmy for Best Children’s Show of the Year.

In the early 1980s, he drew a majority of the storyboards for Hanna-Barbera’s hit series The Smurfs, including the Emmy-award winning Smurfolympics special. Also during the ‘80s, Campbell was a storyboard artist for The Teenage Mutant Ninja Turtles and numerous other hit shows of the era, including Flintstones, Jetsons, Captain Caveman, Scooby-Doo and many other shows.

The 1990s took Ron Campbell to Disney TV Animation where he was responsible for animation direction on Bonkers, Goof Troop, and Darkwing Duck. He also spent much of the decade storyboarding for Klasky-Csupo’s The Rugrats, Rocket Power, and the bizare adult cartoon, Duckman. During that time, he was nominated for an Emmy for a storyboard for Ahh! Real Monsters.

Since ‘retiring’, Ron Campbell has been doing Pop Art paintings often based on the cartoon shows he has helped create in one capacity or another, and has been showing his work on the Beatles TV cartoons and The Yellow Submarine in galleries around the country. His Pop Art Beatles work sell in galleries internationally and all over the USA. You are invited to Google ‘Ron Campbell Animation Art’ to see some of that work.